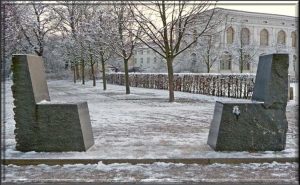 Goethe’s brief formulation of World Literature (Weltliteratur in German) as noted in his conversations with J. P. Eckermann is well-known for scholars and students of World and Comparative Literature: “National literature is now rather an unmeaning term; the epoch of world literature is at hand, and everyone must strive to hasten its approach” (p. 133). The debate on World Literature, whether as a category or as a practice, has always got back to these few lines, notably in David Damrosch’s 2003 What Is World Literature? Yet, this much quoted fragment has almost completely eclipsed another text of Goethe’s that primarily concerns the topic of World Literature: West-East Divan (or West-östlicher Divan in German).

The West-East Divan was first published in 1819, followed by a second expanded edition in 1827 (same year that the Weltliteratur conversation with Eckermann took place). The Divan is primarily known as an imitation of the 14th century Persian poet Hafiz (as noted, for instance, in The Princeton Sourcebook in Comparative Literature); however, in addition to the poetry portion of the book, the Divan comprises an impressive 250 pages of “Notes and Essays for a Better Understanding of the West-East Divan.” The reason why these “Notes and Essays” have remained overlooked in English is not complicated: they were not translated into English until 2010 with Martin Bidney’s complete translation of the Divan (a new complete translation of the Divan by Eric Ormsby has also been recently published. I have yet to look at this new release, but the publication of two translations within ten years after two centuries of neglect suggests what a gem had been dismissed for such a long time). A detailed examination of the “Notes and Essays” is beyond the scope of this blog post, and I hope to publish my reading of the text sooner than later. In the meantime, I maintain that this section of Goethe’s Divan is a remarkable text for students and scholars of World and Comparative Literature for several reasons. First and foremost, it clarifies Goethe’s vision of World Literature when put into practice by him. Although Goethe does not use the term Weltliteratur in the Divan, the text is certainly his most comprehensive account of what it means and what it looks like to go beyond the borders of National Literatures. His specific destination in the Divan is “the Orient,” and, in his own words, he acts as “a traveler who will be worth hearing if he eagerly assimilates the ways of life of a strange country, tries to appropriate its forms of speech, and learns how to share views and comprehend customs” (p. 175). Through this romantic, exotic starting point, Goethe offers a historicist account of “Oriental poetry” that begins with the Bible and continues with pre-Islam Arabic poems, then the Quran, and finally 500 years of Persian poetry between 11th and 16th centuries. (He also touches on the topic of translation in a few paragraphs which could be additionally interesting for the field of World/Comparative Literature.)

What I would like to emphasize here is that Goethe’s “Orient,” based on the “Notes and Essays” of the Divan, is a “real” geopolitical entity with concrete borders, and its poetry could be a means to not only learn about customs and habits of “real Oriental” people, but also to identify the “Geist” and “essence” of the “Orient” and its culture. This “Geist” or “essence” of the “Orient,” that characterizes the “Orient” as opposed to the “Occident” or the “West,” according to Goethe, is “despotism.” (We later see how Karl Marx and Max Weber, for instance, take for granted the legitimacy of this “Oriental despotism” within their sociological analyses of Asiatic societies and Islam.) My disagreement with Goethe, however, is not about his answer, that whether or not “despotism” is the accurate point of differentiation between the “Orient” and the “Occident.” Rather, I believe that the question itself is misleading; looking for a “Geist” or “essence” to create some form of distinction between “Orient” and “Occident” is useless, and such a question can only satisfy an “Orientalist” will to power over the “Orient.” Of course, Goethe had not read Edward Said; but neither had someone like J. L. Borges, and Borges’ approach to the “Orient” and his practice of World Literature is fundamentally different to that of Goethe.

Borges has several short stories that deal with “Oriental” themes, characters, locations, and texts. One can think of “The Aleph,” the mysterious “Tlön, Uqbar, Orbis Tertius,” “The Book of Sand,” “Hakim, the Masked Dyer of Merv,” or “Averroës’ Search.” The short story that stands tall among his works of fiction as a practice of World Literature is “The Approach to Al-Mu’tasim,” a re-creation of Farid al-din Attar’s 12th century Persian Sufi book of poetry Conference of the Birds. Again, a detailed investigation into Borges’ body of work with respect to World Literature and things of the “Orient” requires a more extensive piece; still, we can get a glimpse into his understanding of the “Orient” by looking at a fragment from his 1977 lecture on “The Thousand and One Nights” (from Seven Nights) where he offers his most direct account of the topic:

Borges does not deny the existence of an “Orient,” but at the same time he refuses to think of it as a “real” geopolitical entity with material borders. His “Orient” belongs to the realm of imagination; it is a world within books like 1001 Nights and Conference of the Birds that belong to a planetary library. This is how, contrary to Goethe, he does not fall into an essentializing “Orientalist” trap.

Borges’ understanding of the “Orient” and of the potentials of practices of World Literature (for example what he achieves in “The Approach to Al-Mu’tasim”) does not come at random; nor is it merely due to his genius. I can think of three main reasons that helped frame this vision of his: 1) as a Spanish-speaking writer in South America, he has a fluctuating relationship with the European culture, suspended between the center and the periphery; 2) his polyglotism, and his knowledge of English, German, Italian, and Arabic in addition to Spanish; 3) his experience with the Jewish diaspora (famously, in his 1934 essay “I, a Jew,” Borges points out that “Acevedo,” his last name from his mother’s side, indicates that his ancestors were Spanish Jews that moved to Portugal during the Spanish Inquisition and then came to South America in early 18th century).

That could be the lesson for us students of World/Comparative Literature, to appreciate the significance of learning languages and to be sensitive and attentive to narratives of diaspora and the periphery, in order to expand our vision of what literature is and can do.

Kurosh Amoui is a PhD candidate in Social & Political Thought at York University, Canada, where his in-progress dissertation is entitled “Snails and Snakes: the Esoteric, the Islamicate, and Contemporary Counter Culture Fiction.” Having received his BA in Sociology at the University of Tehran, Iran, he completed his first MA in English at the University of British Columbia – Okanagan, Canada, and his second MA in Religious Studies at Queen’s University, Canada. He also writes poetry in Farsi/Persian.